BENTLEY Motors celebrated its 100th birthday this week by gifting the world its vision of “the future of luxury mobility”.The concept EXP 100 GT showcases the high-end British brand’s projection of what electric motoring will be once battery technology has suitably improved to get get on board.

Bentley unveiled the sleek and muscular two-door coupe at its headquarters in Crewe, England, on Wednesday, the day marking the 100th anniversary of its founding.The look and feel of the EXP 100 GT provide a vision of Bentley’s future design direction while remaining true to its heritage. The vehicle’s exterior harks back to the long fastback shape of the 1952 R-Type Continental along with its rear haunches, sweeping lines and round headlights overlapping the grill. 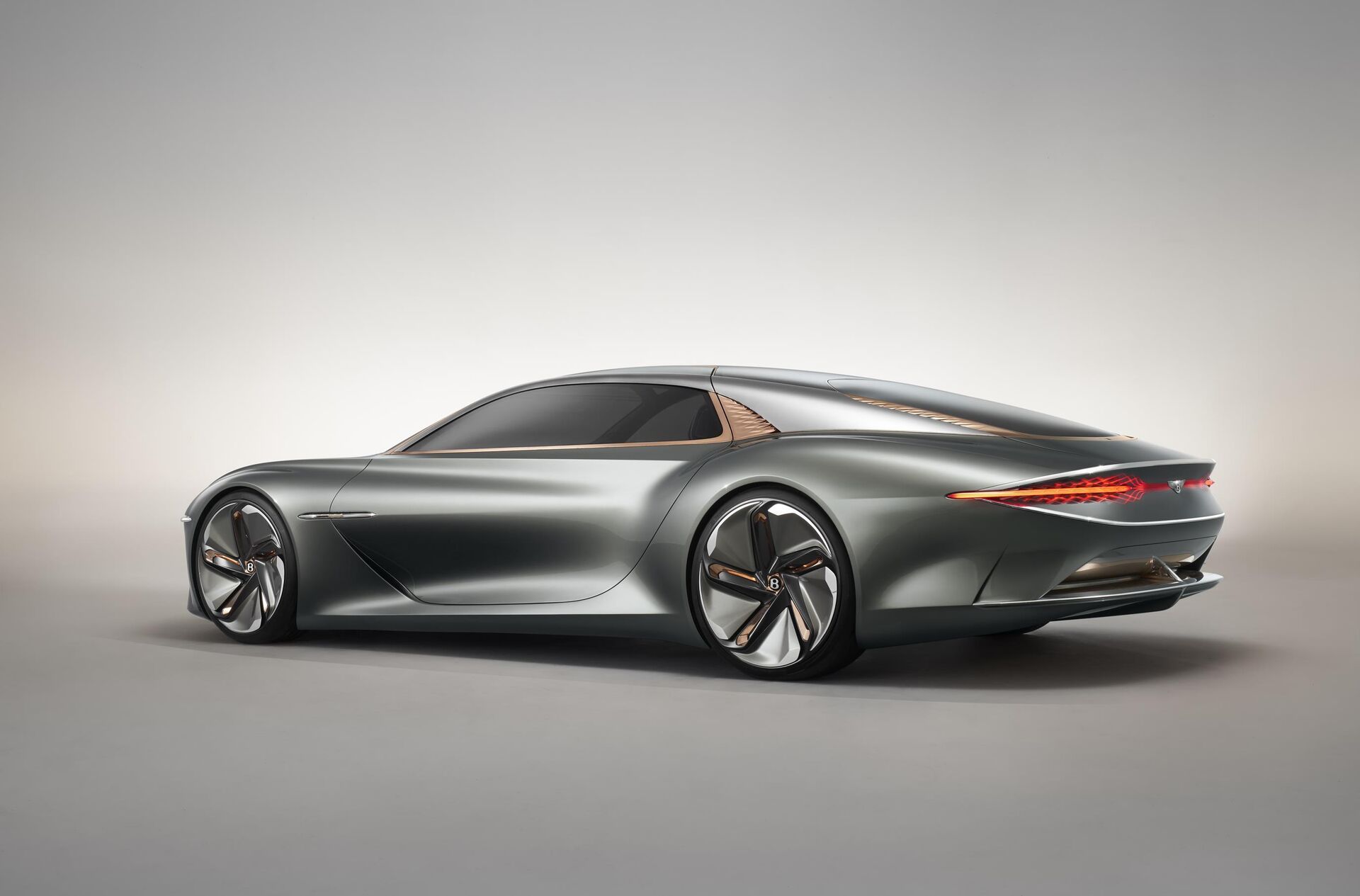 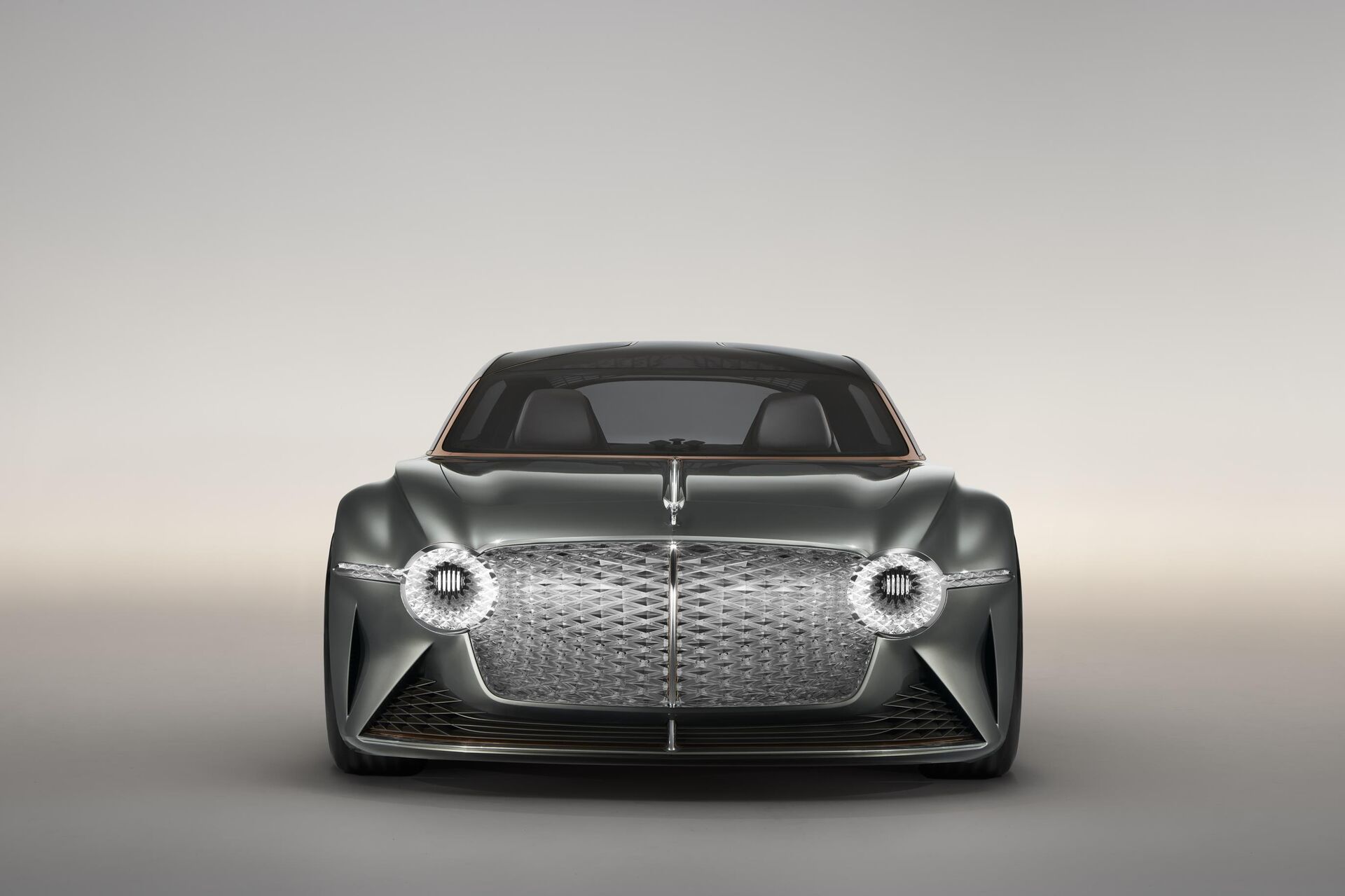 Rivals brands such as Aston Martin have revealed details of their upcoming luxury electric cars, but Bentley says it won’t launch an EV until battery technology is good enough to warrant it – which it predicts won’t be until around 2025.
By then, the EXP 100 GT will be able to be driven or to drive itself autonomously and will include “emotionally-intelligent” technology to make long trips more comfortable. That technology would be pegged off the on-board Bentley Personal Assistant, a more advanced version of Amazon’s Alexa. It’s functionality would be similar to Audi’s PIA assistant which was in the brand’s 2017 Aicon autonomous concept.

‘The Bentley EXP 100 GT is a modern and definitive Grand Tourer designed to demonstrate that the future of luxury mobility is as inspirational and aspirational as the last 100 years.’

Made from lightweight aluminium and carbon fiber, the EXP 100 GT is 5.8 metres long and almost 2.4 m wide. The vehicle’s weight savings coupled with an advanced battery system put its claimed performance capabilities in super car territory, accelerating from 0-100 km/h in less than 2.5 seconds to a top speed of 300 km/h. It will have a driving range of 700 km/h on a single charge.
Bentley says it does this while keeping sustainability front of mind in the Bentley EXP 100 GT experience. Materials used in its construction and finishes include 5000-year-old wood, and its special silver paint is made from recycled rice husks. Inside, faux-leather for the seats has been made using byproducts from wine making. 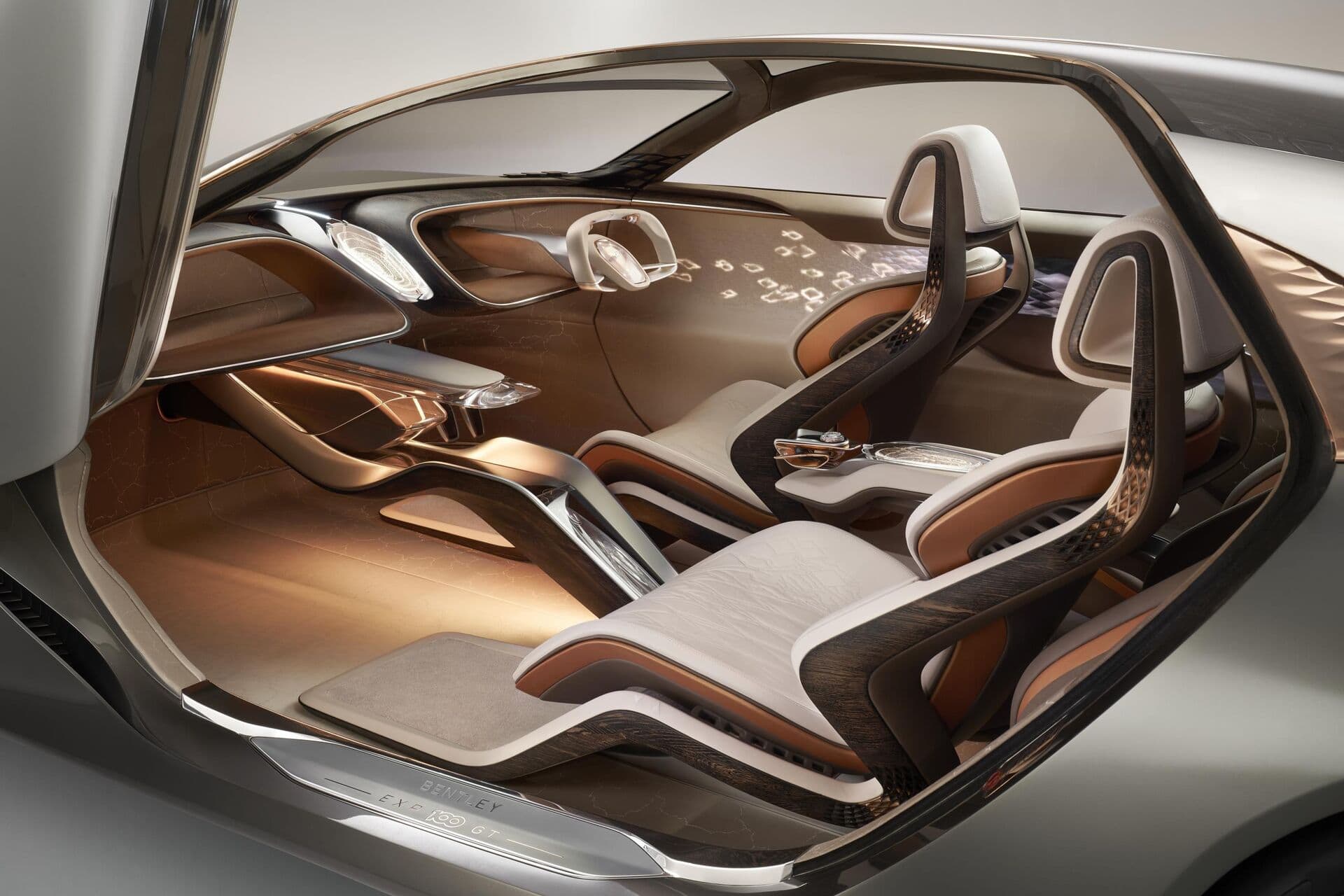 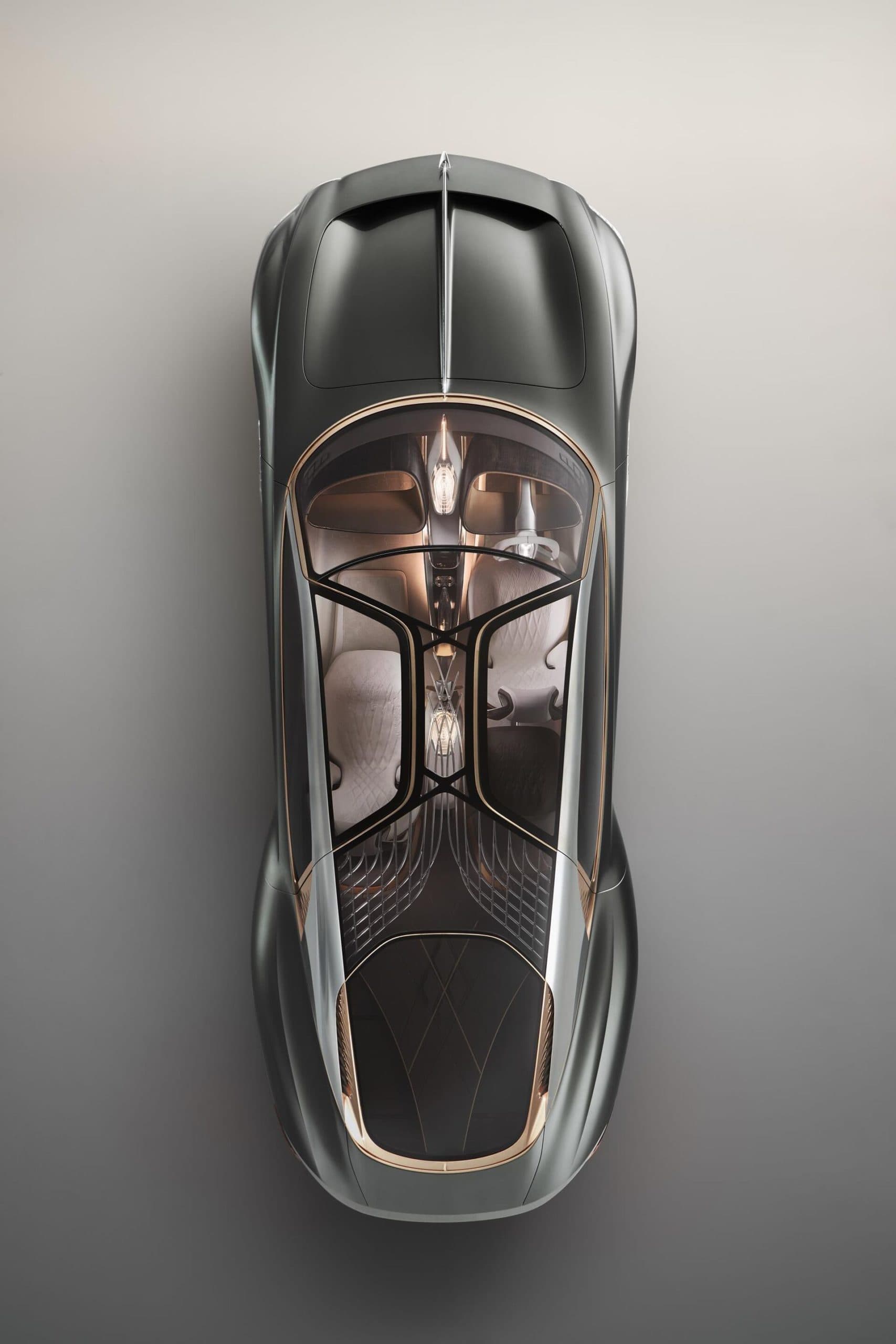 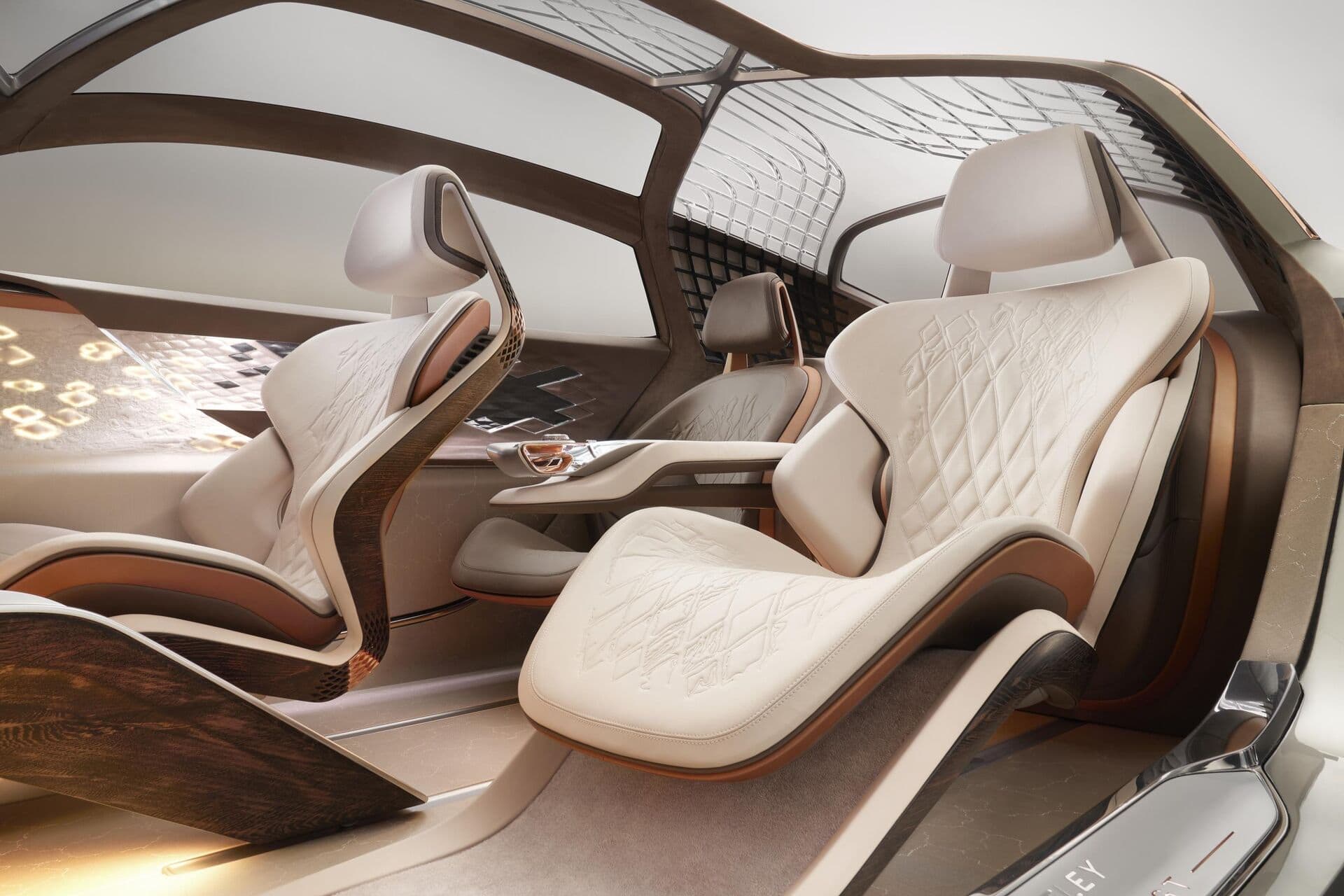 The company says it’s taking a new approach to enhancing wellness on board the use of natural light. It will be “harvested” via prisms in the EXP 100 GT’s glass roof which transfer it into the cabin using fibre optics.

Adaptable Bio metric Seating can be configured in a few different ways depending on who or what is driving on the day, and include sensors which monitor and adjust temperature, passenger position and environmental conditions to suit whoever’s in the car. For example, reactive seat surfaces respond to passenger position on the road, automatically adjusting support when the need is sensed. Biometrics are also used to track eye and head movements, even blood pressure, as demonstration of the future of customized, in-car comfort. The car even has its own special scent created in collaboration with an ethically-aware fragrance house featuring notes of sandalwood and fresh moss.

As you approach the EXP 100 GT, its grill, the Bentley “flying B” badge and interior all light up. “The car literally comes alive,” Bentley says.Bentley chairman and CEO Adrian Hallmark describes the Bentley EXP 100 GT as a modern and definitive Grand Tourer “designed to demonstrate that the future of luxury mobility is as inspirational and aspirational as the last 100 years”.

By Madam Wheels | January 21, 2019
IT’S no secret that Madam Wheels is partial to a sports wagon. Any wagon, really, provided it has everything on board to bridge the gap between well-appointed daily-drive and an adventurous life. The current crop of luxury wagon offerings do just that, earning ticks to...
Read More

By Madam Wheels | July 25, 2018
DIESEL is not dead, despite what some people may think. Not here in Australia, at any rate, even if we are at the dawn of the electric-car era. We adore diesel Down Under, so car marques are going to continue producing them for the foreseeable...
Read More

Victoria’s Secret Not What I Imagined It To Be

By Jemima Clarkson | December 14, 2018
As Enthusiastically and unexpectedly as I have taken to television streaming services recently, I still like to read as much as I can. The production values and the creativity and imagination of the best shows available on TV are very high indeed, but there is...
Read More
Scroll To Top