LAMBORGHINI’S are standout cars in any crowd, with their super-sport DNA and branding drawn from ancient mythology. But put the raging-bull badge on to Australia’s favored sports-utility form and paint it bright yellow, then attention becomes unavoidable.

So Madam Wheels discovered within hours of collecting the marque’s all-new “super sports utility vehicle”, the Urus, returning from a short excursion to find a parking fine slapped on to the windscreen. Some suspect the car was penalized simply by virtue of its brand, others because of its high-vis hue (Giallo Auge, named after a priestess from Greek legend). In truth it had probably overstayed its hour-long welcome, though Stonnington Council’s parking police surely wouldn’t have paid such close attention to a car of less-impressive constitution.

The Urus is indeed a formidable vehicle and is designed to attract the influential female buyer even though there’s not much that’s conventionally feminine about it. It’s loud, it’s aggressive and it’s very, very wide. But none of that matters because this car is all about emotion, energy and excitement and it’s just so much fun to drive. Women – and men – are going to buy it in droves, and they’ll be plenty happy they did, too. Tech heads, particularly, are going to enjoy this car. 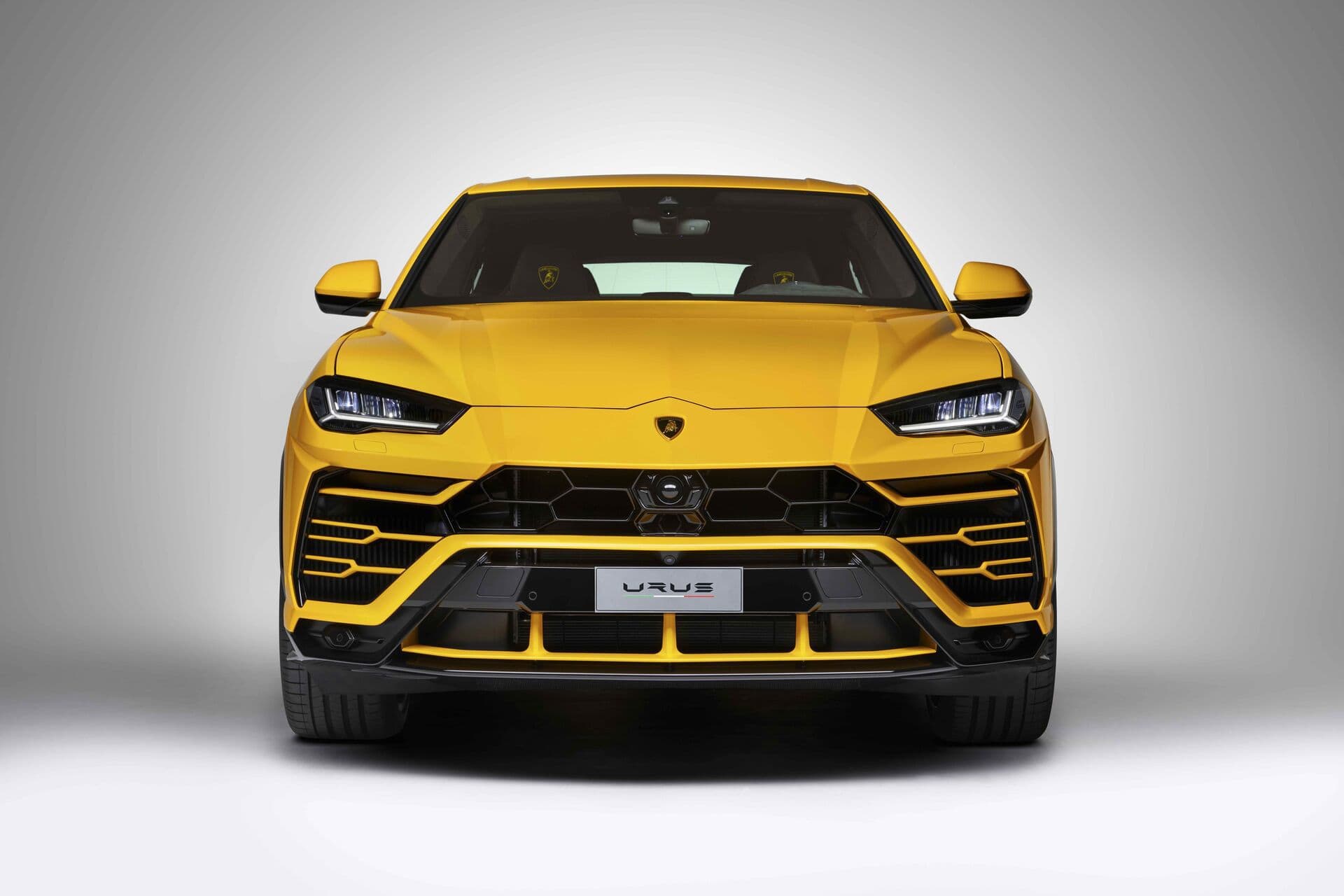 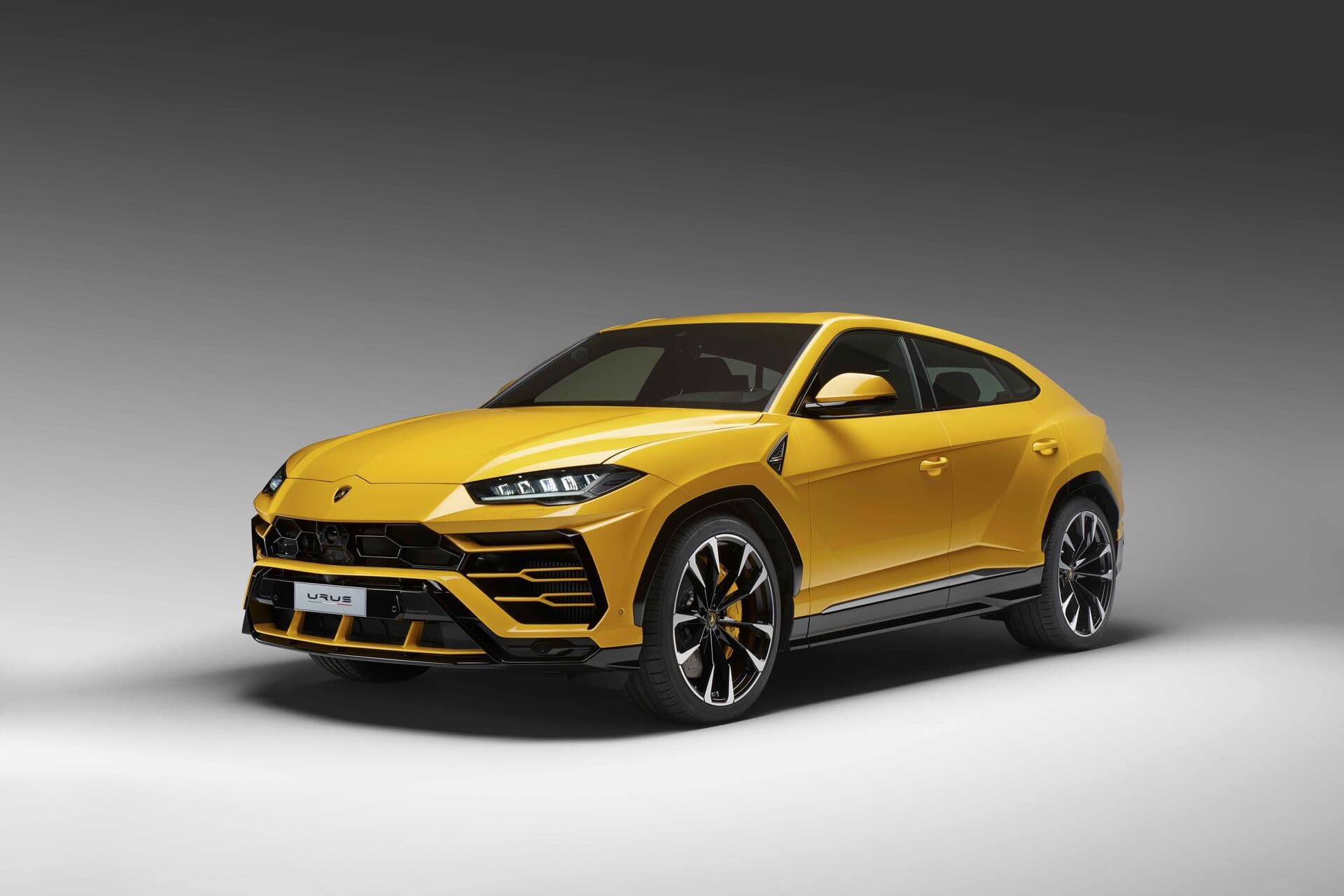 Not only is it powerful, luxurious and pleasing on the eye, driving it, for me, felt like coming home. The engine and a lot of the Urus’ functionality matched what I have in my daily drive of the past three years, an Audi RS6. Everything was where I expected it to be and completely intuitive. Plus, three years is a long time in tech terms, so the improvements – particularly in driver assistance and safety features such as the adaptive-cruise control, blind-spot warning and lane-change assist functions (all standard in the Urus) – were next-level.

‘The most aggressive behavior encountered towards the Urus in the three days I had it was enthusiastic tailgating by city drivers trying to film it with their smart phones.’

The number of cameras and sensors on this car provide views of every conceivable angle. It can look around corners and even prevent the doors being opened if it senses an oncoming vehicle or bike – a handy feature in cycle-mad Melbourne. There was much more besides, which I’ll get into in a moment. On first collecting the Urus from Lamborghini Melbourne, I started steeling myself for what might await me on the mean streets of the city. The last time I drove a Lamborghini here, someone threw an egg at the car.
I needn’t have worried. The most aggressive behavior encountered towards the Urus in the three days I had it was enthusiastic tailgating by city drivers trying to film it with their smart phones, inching ever closer to its imposing rear-end with devices balanced on steering wheels. It was risky business, so I blasted out of town. 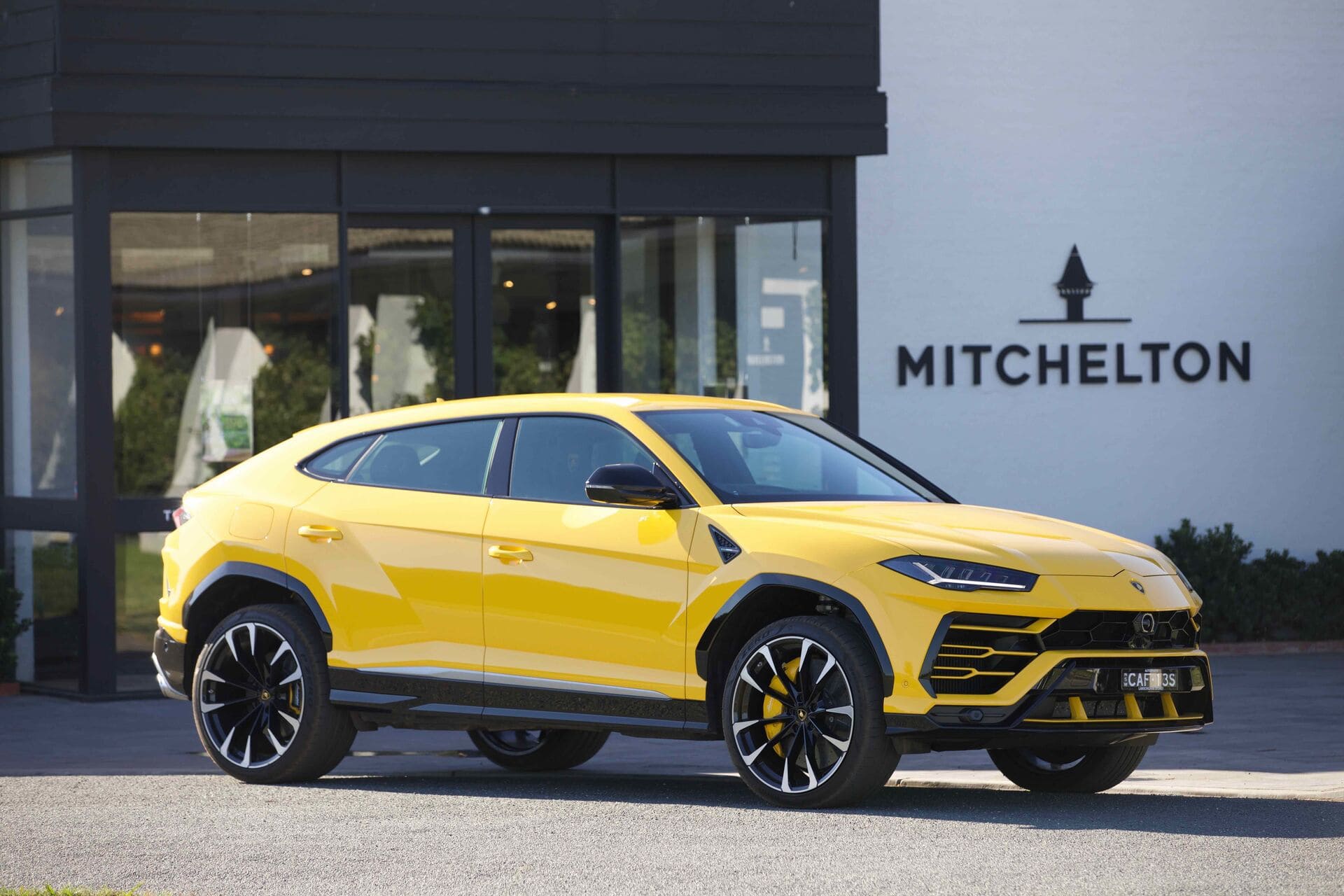 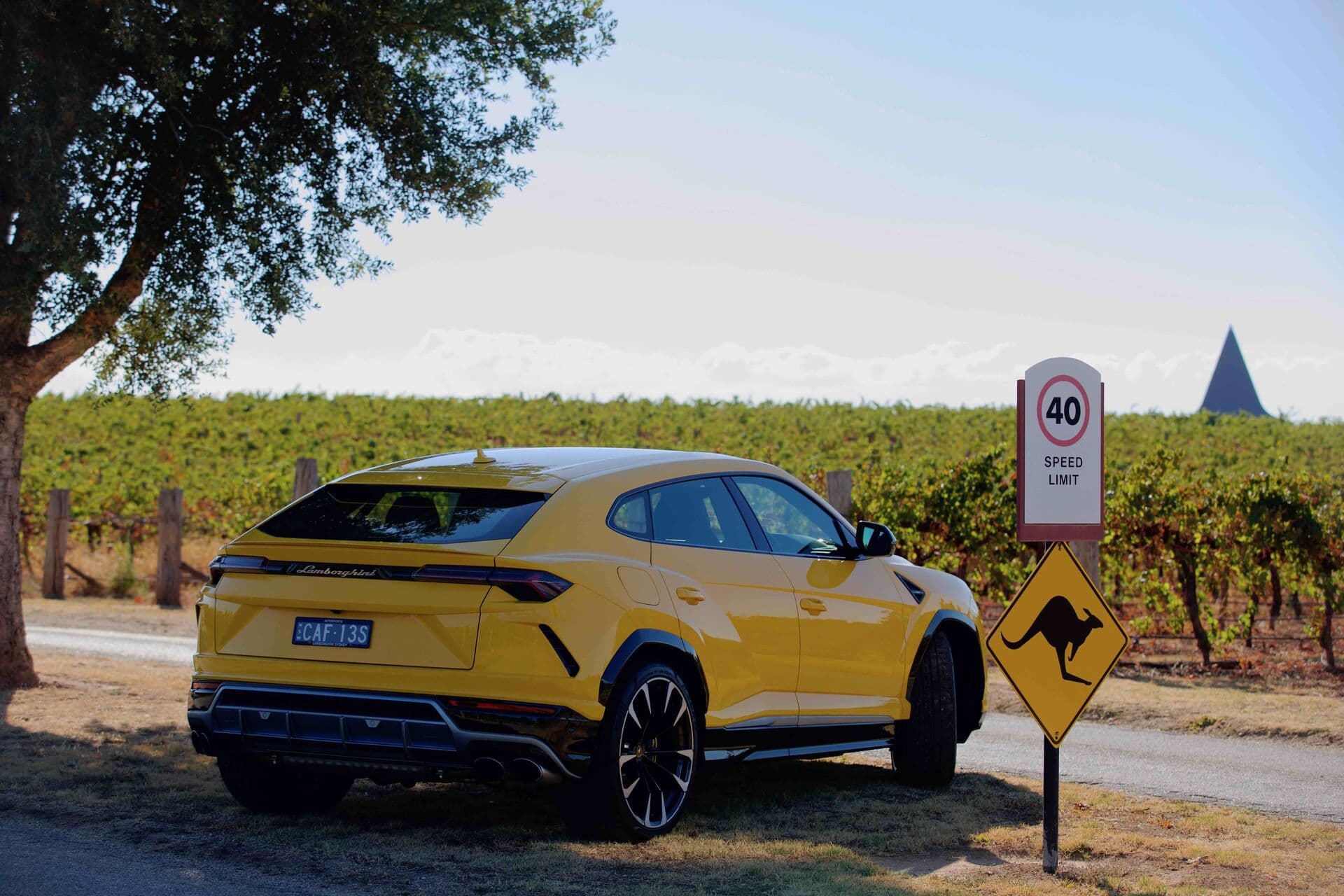 And blast the Urus does, literally roaring to life at the push of a red fighter-jet style ignition button, even with the car set in the most sedate Strada (“Street”) drive mode. Lamborghini has called its drive modes Anima – or “Soul” – and switching through them provides all sorts of sensory pleasure. Not only can the changes in engine timbre and tension be heard and felt with every shift of the driving dynamic selector lever, beautiful graphics on the top of two infotainment touch screens show the car cycling through relevant landscapes, too. Strada features a city, Sport and Corsa (“Race”) glow orange and red, and so on for Sabbia, Terre and Neve (“Sand”, “Land” and “Snow”). The ambient lighting inside the car switches appropriately, too.

Relevant height changes determined by terrain selection are also presented on screen, while the digital instrument cluster in front of the driver changes radically to depict drive modes, with an off-road graph showing the vehicle’s pitch, angle and roll, as well as its height above sea level, the direction it’s facing and the latitude. I like knowing that stuff. Purists can further fine-tune adjustments to drive train, steering and suspension with an “Ego” mode lever. Yes, much of this is probably theatrics. But it provides a feel-good factor for anyone riding in this car that can’t be discounted.

Otherwise, everything’s pretty much run by touch in the Urus, with the infotainment screens providing haptic feedback – a feature we’re familiar with on our smart phones but is unique in a car. The lower screen acts as the climate-control centre where temperatures can be adjusted by tapping or sliding up and down. Seat heating, ventilation and massage capability – the latter two are options – operate from here, too.

Rear seating comes in a four- or five-seat configurations and can be folded flat to boost the already generous luggage capacity from a very un-Lambo-like 616 litres to an enormous 1600 litres.

Lamborghini, like every other modern car marque producing SUVs these days, hopes to capture the influential female buyer with the Urus given our propensity to favour the high-riding, spacious body often perceived as offering more safety by virtue of its size and presence. That last point doesn’t take into account these heavier vehicles’ reaction times, of course.

Carbon fibre may have helped the Urus get around that issue, but the only piece of that material used in the car’s construction is on the fuel cap. The Urus is built of a mix of aluminium, steel and magnesium, leaving it tipping the scales at a hefty 2.2 tonnes. Despite that, it feels light as a whip and as stable as they get in quick turns, and the stopping power of its massive carbon fibre brakes is phenomenal. Which is a good thing because, despite its weight, the Urus is fast, speeding from a standing-stop to 100 km/h in 3.6 seconds. The last time I felt that sort of G-force in a car at take-off was in a Tesla model X P100D in Ludicrous mode. And there’s no electric power train moving the Urus yet, though a hybrid variant is on the cards in future. For now, you’ll be dealing with a 4.0 litre V8 twin-turbo engine, the fuel consumption of which sits at a claimed 12.3 L/100 km. (One local automotive journalist says his off-road test drive measured it at 50 L/100 km, which doesn’t sound outside the realms of possibility.)

There were a few things not to enjoy about the Urus, though I suspect one would adjust to them fairly quickly given how much there is to enjoy about the car. First is that, for the first time ever, Lamborghini has decided to attach the paddle indicators to either side of the steering wheel rather than the column. That means the right or left indicators move in line with the wheel, often ending up upside down on the opposite side of the wheel, which makes it tricky to work out which side is which if the need arises to indicate your way out of a turn. That happens surprisingly frequently, I found.

The Lamborghini logo in the middle of the wheel provides a good guide of orientation, but that requires taking one’s eyes off the road which, coupled with the unwanted distraction of trying to locate the relevant indicator, makes for the exact opposite of pure driving pleasure. Secondly, the back window isn’t exactly large, so there’s a terrible blind spot on the rear left of the car. So the improved blind-spot capability on the passenger-side mirror is absolutely essential.

Then there’s the gigantic width of the car – more than 2m across, and that’s before the mirrors are factored in. It’s something to keep in mind if you’re not comfortable parking in tight spaces or travelling in compact traffic. The gutter rash Melbourne’s blue stone gutters could cause on the Urus’ 23-inch diamond polished rims didn’t bear thinking about. There’s little doubt the Urus would do a good job of pushing back if it needed to – its name means “auroch”, after all, an ancestor of modern cattle. I’ve also seen it translated as a “shaggy, long-horned wild ox”, long since extinct. That hardly seems a fitting descriptor for the Urus, however, given its life has just begun. At any rate, if things go the way they’re looking they will, the Urus may well be on the road to becoming the stuff of legend.

Why It Matters To Be Match-Fit For McLaren’s 720S

By Madam Wheels | October 23, 2018
IF YOU’RE into buns of steel and thighs of iron, a car from the British luxury automobile maker McLaren may just be the car for you. If you haven’t already got said physical attributes, you’re likely to end up with them anyway - either by...
Read More

Crackdown On Tyre Safety For Snow-Goers

By Madam Wheels | June 3, 2019
Regular visitors to the Australian ski fields may be familiar with how easily things can come unstuck for traffic in icy conditions. Last year, was a particularly busy season for emergency services at Mt Buller, in the Victoria Alps, where crews were regularly called on...
Read More

By Madam Wheels | August 30, 2018
WOMEN were very much front of mind last week when Ferrari Australasia rolled out $11 million worth of its fanciest metal to celebrate the marque’s inaugural participation in the upcoming Targa Florio Australia Tribute. ‘Being a Ferrari-endorsed event, we had to make sure we secured...
Read More
Scroll To Top