VICTORIA’S sinister speed cameras have become an occupational hazard for Madam Wheels, given their full-throttle roll out into low-speed zones across Melbourne.

So, imagine my delight recently when I was given permission to absolutely punch the accelerator in a high-performance car to reach speeds of up to 240 km/h – all the while in the company of an off-duty NSW police officer who’d been assigned as my designated driving instructor beside me. Poor guy. There’s no way that man was having as good a time as I was as I tore down the back straight of Sandown Racecourse with helmets on and roll bars in place.

Oblivious to his probable mounting terror, my laser focus was fixed on the witch’s hat ahead marking the beginning of the next apex. Braking hard, I rode the curb and traced the imaginary line-of-fire before shooting off again like a fuel-starved wildcat bearing down on prey. Which was apropos, really, given that Jaguar Land Rover had organised this April track day to showcase its fastest and most powerful road car to date, the Jaguar XE SV Project 8.

‘My brave drive instructor may have been in need of a wardrobe change at the end of our track time together [and was] undoubtedly pleased to be returning to his day job with the NSW constabulary.’

The Project 8 is indeed a beast, and a rare one at that. Only 300 will be produced globally, all of them left-hand drive, which means, in Australia, its use will largely be confined to race tracks like Sandown. The Project 8’s already a proven force in a track environment, having secured fastest-lap rights for a four-door saloon on the famed German Nürburgring track. It chewed through the “The Green Hell’s” 26 km in a searing 7 minutes 21.23 seconds, an 11 second improvement over the previous saloon table leader, the Alfa Romeo Giulia Quadrifoglio.
This was certainly gratifying for the engineers at the British-based Jaguar Land Rover Special Vehicle Operations (SVO) Technical Center who’d been tasked with producing the fastest and most powerful production car Jaguar had ever produced. 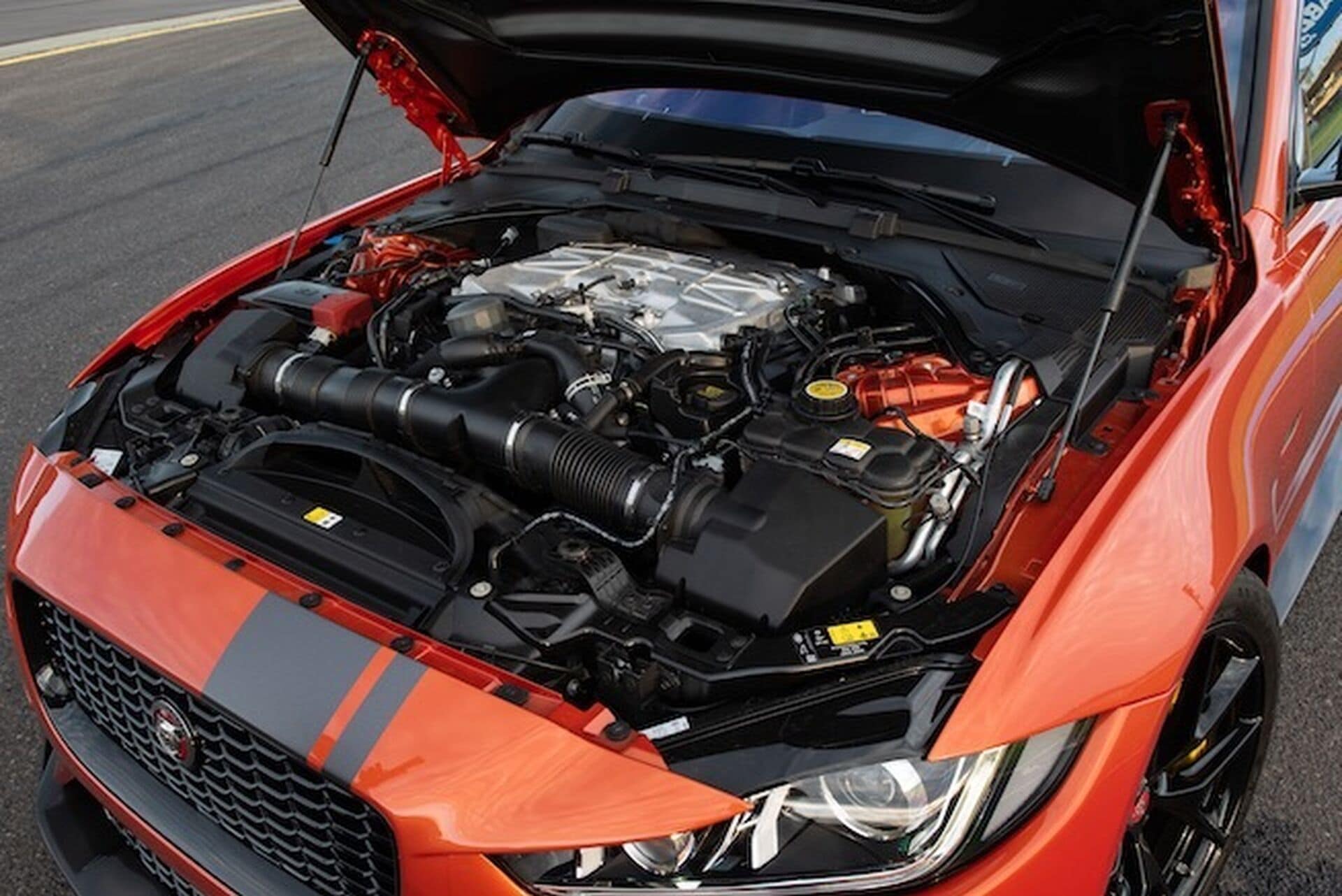 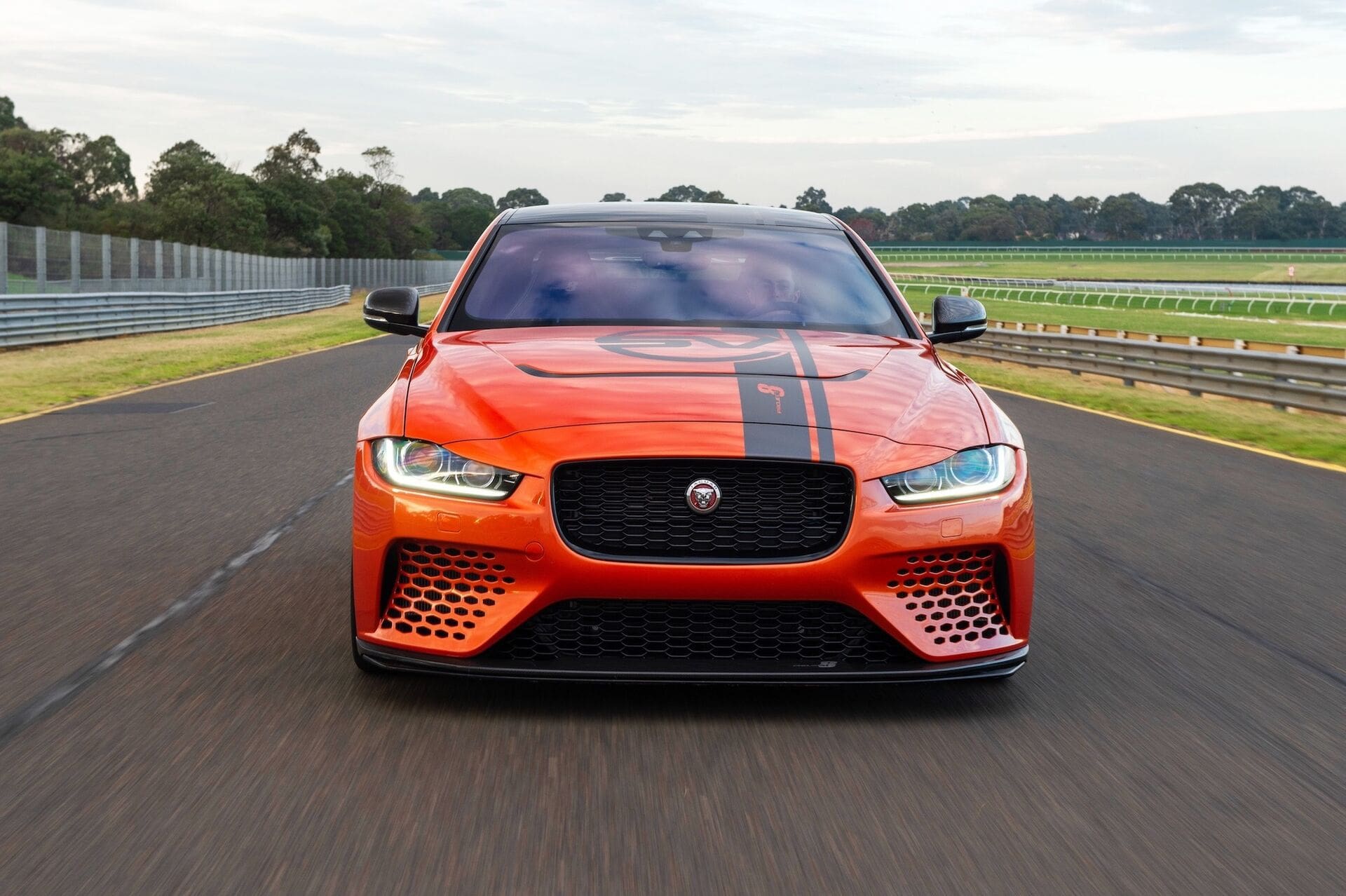 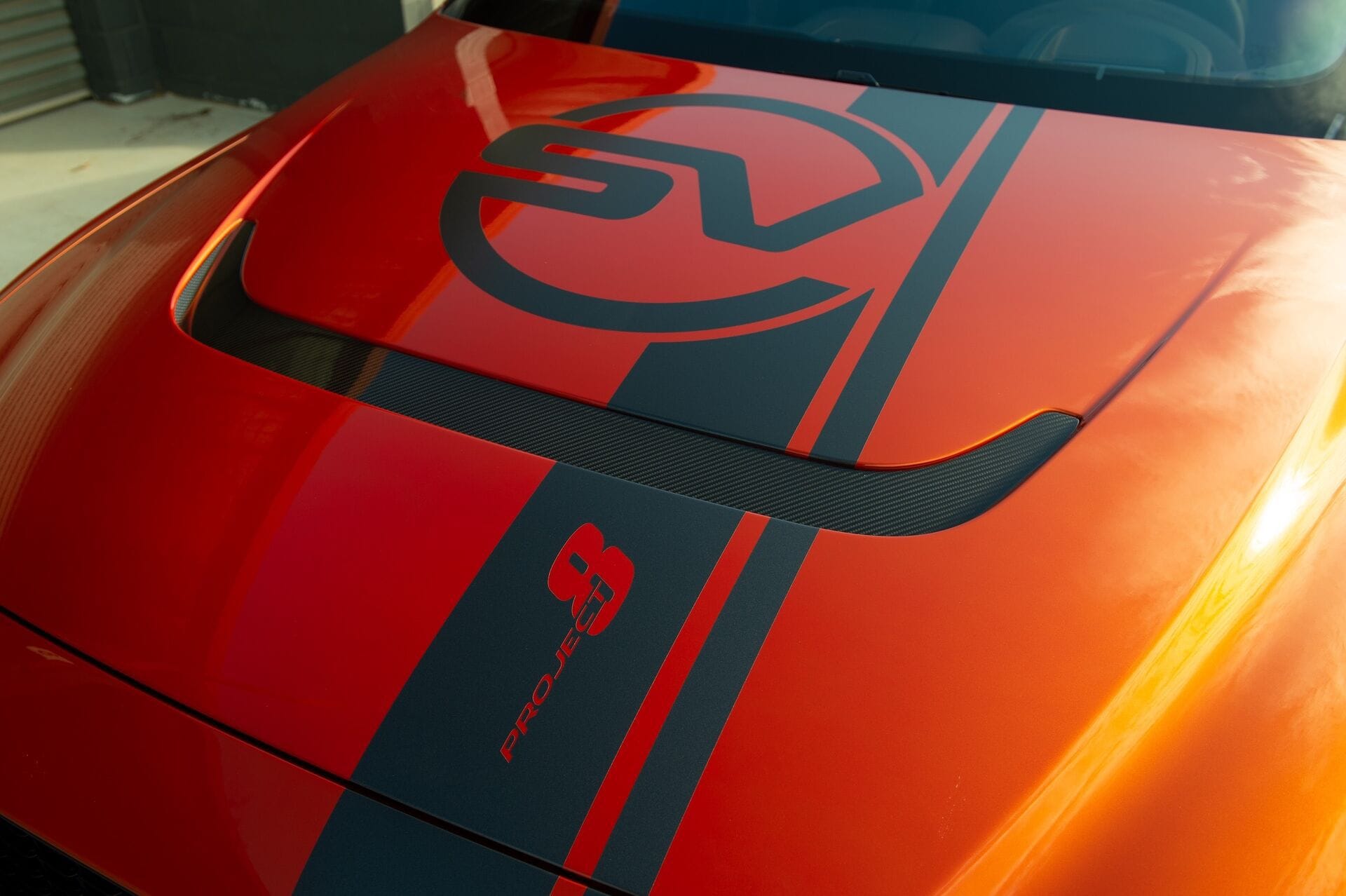 They started by dropping their biggest engine into the most compact sedan in the Jaguar fleet, the XE, on which 75 per cent of the body panels are now bespoke. Within that, every race-ready feature has been fitted for a reason, such as the front air vent which is positioned to more efficiently cool the ginormous, 592-horsepower, 5.0-litre, supercharged V8 engine.

Despite such heft under the bonnet, engineers managed to keep the weight down by using carbon fibre for the hood, bumpers, fenders, side skirts, splitter and rear spoiler and forging it on to the Project 8’s lightweight aluminium frame. The front splitter and rear spoiler’s angle can even be manually adjusted to reduce drag or add down force, depending on what a driver might be trying to achieve at any given moment.

All of this helps the Project 8 to a top speed of 322 km/h and its capacity to blast to 100 km/h in 3.7 seconds. Needless to say, this would-be race driver felt like the real deal as I strapped into the carbon racing seats fitted as part of an optional “Track Pack”, complete with four-point harness.

Blasting along the Sandown track, the Project 8 was agile though the corners and blindingly fast on the straights which might have been terrifying for my instructor but didn’t worry me because I knew the car was fitted with the biggest brakes in the brand.

They’re dressed with unique 20” forged alloy wheels which are stronger and lighter than your standard cast alloy and specially designed to reduce drag. I felt every bump and cornering dynamic acutely during the drive, but I was meant to. The Project 8 is built to help drivers react with better precision more quickly, so includes motor-sports derived suspension and a modified all-wheel-drive system.

The only outstanding feature which added no apparent speed advantage to the Project 8 I piloted were the decals of the big cat pouncing. They looked cool, though – especially on the Valencia Orange duco, a special SVO hue – so might hasten sales for those happy to pay the big bucks for a car which may need a trailer to get it from A to B.

Australian pricing for Project 8 starts from $325,000 for the four-seat variant, with the more-expensive two-seater coming in from $349,000. At least you won’t have to worry about on-road costs, especially Victoria’s incoming expanded luxury car tax – or our State’s in numerous speed cameras.As for my brave drive instructor, I suspect Brett Kuhner may have been in need of a wardrobe change at the end of our track time together. He’ll undoubtedly have been pleased to be returning to his day job with the NSW constabulary.

By Madam Wheels | August 19, 2018
IF YOU love your cars and you’re into good company and beautiful scenery, there are few better ways to spend a day out than taking part in an organised drive day.There are a handful of companies offering the opportunity to drive super cars through picturesque...
Read More

By Madam Wheels | September 17, 2020
Buying a car should be a delightful and exciting experience for anyone. After all, for many it will be the second most-expensive purchase after their home. But the reality of the process can be confronting, intimidating and downright unpleasant for women, which is bizarre given...
Read More

By Madam Wheels | April 8, 2021
When you’re into road trips and your daily drive is a twin-turbo V8 Audi RS6, the notion of getting behind the wheel of something silent and electric hasn’t held much appeal, especially given the range issue in a country as big as Australia. But when...
Read More
Scroll To Top